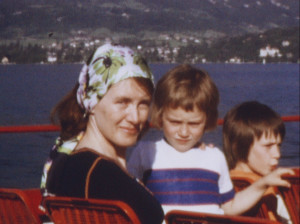 In 1972, writer Annie Ernaux (winner of the 2022 Nobel Prize for Literature) and her husband Philippe Ernaux bought a Super 8 camera. Over the subsequent decade, Philippe used it to capture family life with their two sons, from distant journeys to intimate moments—blowing out candles on a birthday cake, cycling without training wheels. The shots combine to form a moving photo album, over which time has laid a grainy filter of nostalgia.

In The Super 8 Years, which she made with her son David Ernaux-Briot, Annie Ernaux reflects on the home movies in thoughtful commentary, and in particular on the stories that are told in the margins of the footage, or beyond: Pinochet’s coup in Chile, where the family was traveling at the time. The books she was writing. The asphalt road that would later cut through a landscape.

As the children grow older and the marriage begins to come unstuck, the camera focuses more on the horizon and less on the people close by, eventually leaving the family behind altogether. What remains is the film, bearing weathered witness to what once was.